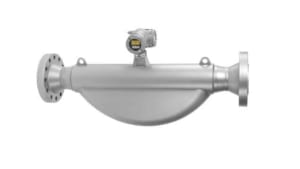 The mass flow meter measures the mass per unit time (e.g., kilograms per second) flowing through the device. Volumetric is the mass flow rate divided by the fluid density. If the density is constant, then the relationship is simple. If the fluid has varying density, then the relationship is not simple. The density of the fluid may change with temperature, pressure, or composition, for example. The fluid may also be a combination of phases such as a fluid with entrained bubbles. Actual density can be determined due to dependency of sound velocity on the controlled liquid concentration.